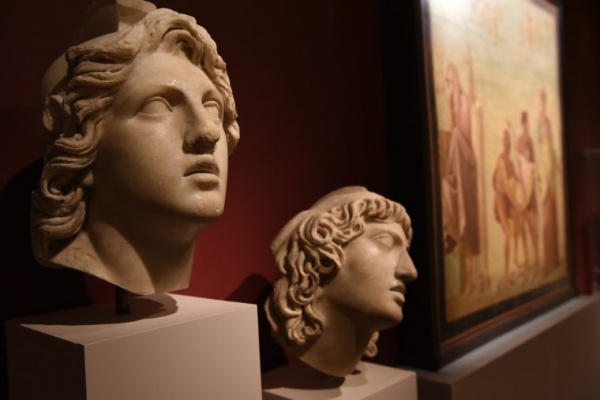 If I asked you to imagine what the ancient Greeks would have been like, what would spring to mind? The legendary Hercules? The mythical Theseus? Socrates and Plato debating under the Acropolis? Brad Pitt in Troy? With the survival of epic literary masterpieces like The Iliad and The Odyssey and, more recently, with films like Troy, 300, Clash of the Titans and even Disney’s Hercules this is no surprise. Our conception of ancient Greece is defined through the grand ideas and magnificent stories that are still being retold today. Imagining your average ancient Greek citizen is surprisingly hard.

The ‘Emotions’ exhibition currently on display at the Acropolis Museum challenges these narratives. Curated by Professors Angelos Chaniotis and Ioannis Mylonopoulos, as well as Nikos Kaltsas honorary director of the National Archaeological Museum, the exhibition relays a different story about who the ancients were and how they connected with each other and to the world around them. Here, the ancients are not merely seen through glorious objects or sites of antiquity. They appear as human beings who experience diverse emotions and express them in different ways depending on where they are and who they relate to. The household, sanctuary, cemetery, agora and battlefield are the main social spaces through which the exhibition explores the lives of these long-dead people. Engravings of children playing with toys, sculptures of mothers and daughters mourning together, paintings of men enjoying a symposium or soldiers killing each other in battle, bring to life ordinary interactions between soldier and enemy, master and slave, owner and pet, god and worshipper.

Love, lust, pain, grief, rage and revenge unfold through the 129 objects, sculptures and paintings that this exhibition has brought to Athens from the Onassis Cultural Center in New York. Take this inscription on an ancient funerary stele on display at the exhibition. It is written from the perspective of a piglet that died in a traffic accident:

‘I crossed every land with my own feet, alone, undefeated. But now I have left the light because of the violence of the wheels’.

Here, we see a family mourning and commemorating their beloved pet through the written gesture. The family personify their pet by giving it a voice and imagining how it would’ve wanted to be remembered. This highly empathetic expression of grief conjures a world regarded as distant and long gone. It tells us that the ancients were not all epic demi-gods, but that they loved, cared for and mourned their pets much like we do today.

Beyond captivating instances of daily life, the exhibition also offers a broader definition of history. It tells us that history is not only a chronology of events but, crucially a series of minor encounters and small narratives. ‘As a historian, I prefer stories from history’ says the curator, Angelos Chaniotis, who teaches Ancient History and Classics at Princeton University. What Chaniotis wanted to achieve with this exhibition was to tell a story with a beginning, a middle and an end. A story that is interested in people rather than grand, epochal changes.

The exhibition successfully illustrates these modest, individual stories and sheds a new light on the ancient Greeks. The Athenians were not just a democratic polis, a theatrical stage or a legendary army, but also a community that experienced and expressed complex and nuanced emotions. Heartbreak or betrayal: the ancients may have been from a different time, but their existence was not unlike ours today. Despite the apparent differences - and I can’t say I imagine many resemblances between myself and Hercules - the exhibition shows us that emotions remain a thread tying cultures, countries, religions and even historical periods together.