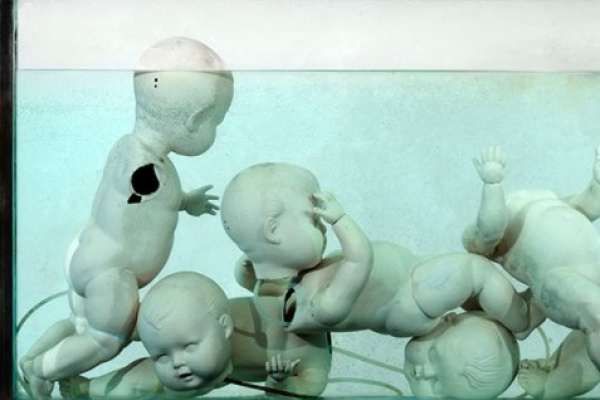 —How did you decide on this exhibition?

Whoever cares for today’s Greece ensures to highlight her as a well-meant issue. In discussions with Ioannis Arhontaki, Art Director of the Museum of Contemporary Art of Chania - Olivepress, since a while we were considering with enthusiasm the idea of ​​the myth of the Rape of Europe, which is great subject directly associated with Crete. Along the way, however, it was natural to be affected by current developments especially with the growing problem of immigration from the third world to Europe. Thus, came about the theme of “Philoxenia” (Hospitality) that is perhaps the most civilized expression of man as unselfconscious love, compassion towards the other, and great condition of coexistence. Throughout the Odyssey of Homer, where the elements of nature and fate disorientate Odysseus, lingers the internal question, “Might have I arrived in a civilized place where they count the law, they love the stranger, and they fear God?” So, we thought of commisioning 1+33 artists to answer this question about today’s Europe. The challenge to give the philosophical dimension of the issue we posed was met by CHANIaRT’s partner, adjunct lecturer at the Hellenic Open University and Art Critic Constantinos Proimos.

—If we come, what shall we see?

We shall see 1+33 answers to the one question we posed. The separate first artist belongs to an exhibition curated by John Stratoudakis. It concerns the work of Natassa Karakatsani who to her honour studied over two years unaccompanied minor refugees from various affected countries of the world, part of which is currently housed in Makrinitsa, Volos, one of the shelters managed by the youth support centre - Arsis. A series of 15 photographs resulted that deeply and unpretentiously record on the one hand the gratitude of those people for the care they receive, but on the other hand their anxiety about the future. Hence the title “Unknown Destination” refers to an indeterminate future that fate holds especially for these children of the world. The other exhibition, which I took to curate personally, is entitled “Welcome - The Hospitality and its Borders.” There, 17 women and 16 men, all professional artists, offer in their special visual vocabulary their position regarding the archetypal concept of hospitality and the worrying issue of immigration in Europe today.

—What is the message that the exhibition aims to pass given the sensitive issue of immigration with which it deals?

One of the key messages of the exhibition is to highlight that the ancient Greek tradition of matter-of-fact hospitality seems to be a most exotic past worth studying. The hosts disappeared as “the speaking water has dried up.” As is natural, the world is now progressing to other levels and directed to other points. It is unthinkable today for just any European to behave with the same generosity, compassion and morality to the stranger as the Homeric poem describes the kings of Sparta or Phaeacia. Excepting the remaining hospitable “Hellenes [...] who particiapte in our education,” which fortunately still stand as beacons in the darkness, the world today has largely lost its humanistic orientation and focuses on the insatiable delight of its material needs. Such a departure from the classical education has led the West to exploit the Third World from a position of strength. And it is precisely this revenge of the Third World that Europe experiences today. The 1+33 artists of Philoxenia underline directly and unequivocally this very fact. The artists Cris Gianakos, Dionisis Fragias, Nikos Giavropoulos, Michalis Kalaitzakis, Barbara Knight, Nikos Kryonidis Alexandros Manganiotis, Dimitris Merantzas, Alkistis Michaelidou, K.N. Patsios, Natassa Poulantza, Alexander Voutsas, refer with demonstrative irony to the “Welcome” wish. With their work, Lamprini Boviatsou, Lydia Dambassina, John Dialinos, Konstantin Fischer, Antigone Kavvatha Maria Michelogianni, Eleni Mylonas, Lena Dimova, Antonia Papatzanaki, Miranda Skylouraki, Giorgos Tserionis, cauterize the injustice and barbarism of xenophobia. The works of Ellie Griva, Mariva Zacharof, Yannis Markantonakis, Alkistis Michaelidou, Hariton Bekiaris, Eleni Pavlopoulou, Marina Provatidou, Eva Stollenerk, Sofia Vlazaki,  Petros Xenakis, express a moral, spiritual and benevolent approach. Therefore, since the archetypal hospitality is obviously hurt, the exhibition tunrs into a platform for treatment. The people who democratically decide on their fate and the new generation that will manage the future are called together to care for immigrants, to heed their grief and, if they are not able themselves to their extent to eliminate the problem, at least they may request the elimination of the root that feeds it.

—Is there a work that stands out for some particular reason?

All the 1+33 artists approach the subject in a genuine and noticeable manner and their works reveal the latest trends in contemporary art production. It is worth noting the indirect manner in which Sofia Vlazaki refers to the roles of host / guest, offering an example the relationship between insects and flowers in nature. However, Lydia Dambassina’s work Deadline clearly stands out! It was created especially for the exhibition and is bound to become an emblem of the immigration tragedy in all of time’s glory – past, present and future. The child doll bodies that are dismembered and immersed in the aquarium’s water compose a memorable, creepy and shocking spectacle. The composition expresses eloquently the loss of life of innocent people for which the superpower fellow humans carry all the responsibility. At the same time it is an excellent work because what at first glance looks found is a purely sculptural creation.

With globalization the Greeks have lost much of their special character, but rather superficially. Philoxenia is in the DNA, the genetic material of their cells. It must fill with pride the Greeks the fact that the chronologically earliest and artistically unsurpassed description of philoxenia is mentioned in the Homeric epic of the Odyssey, especially where King Menelaus with Beautiful Helen care for Telemachus and his partner Peisistratus even before the latter state their identity. This passage is recorded on the verso of the catalogue in the ancient version with block letters and joined words, which ironically makes it extremely illegible and difficult to interpret today. Alkistis Michaelidou, who used it as inspiration of her work The European Hospitality and its Writings, further alienated it with wavy wire atop the rows. It is, however, offered on the cover for re-reading. Let the readers of Greek anywhere make an attempt to decode the reading of the ancient text, to distinguish the words that ultimately remain familiar, to appreciate the power of this description, and to interpret the significance of the content. Probably this will arise within them from hibernation this most civilized expression of man.

—What is the role of art in defying racism and xenophobia?

The art of each era is the blind seer, the panopticon or else the eye of providence. Today, that these values, principles and ethics are tested as never before, art has a responsibility and duty to act therapeutically to social problems facing the world. With its suggestive and exemplary way art has the power to defy racism and xenophobia, perhaps more effectively than education, politics and legislation. Having the experience of an art exhibition with a contemporary meaning and message, visitors before the works are exposed to invisible energies that can change forever their worldview. For this reason, the state and society owe to support cultural self-serving efforts of this kind. And this support is not so much a matter of financial aid as moral aid.

—Why choose the exhibition to be held in Chania? Are you planning to bring it to us in Athens?

In times of crisis it is wonderful to highlight the cultural activity in the country’s periphery. Crete is par’excelence a hospitable place and inspires to the foreigner the sense of feeling native. We are grateful to the Region of Crete, the Regional Unit of Chania, and the Municipality of Platanias that supports our work. Philoxenia has a long duration (from 13 June to 1 November 2015), which gives a chance to anyone in Crete - native, visitor and foreigner - to visit it. We believe that in Crete the exhibition will fulfill its role. Certainly on this occasion we extend collaboration to any institutional organization in Athens that would be tempted to accommodate Philoxenia following its run in Crete.

—What else can we expect from you in the future?

Not knowing what fate stores also for us, I personally extend my promise to faithfully serve contemporary art that is meaningful in our times, and is worth communicating to the world. This can be done anywhere, provided that there is respect for god, the law and the foreigner. Thank you.