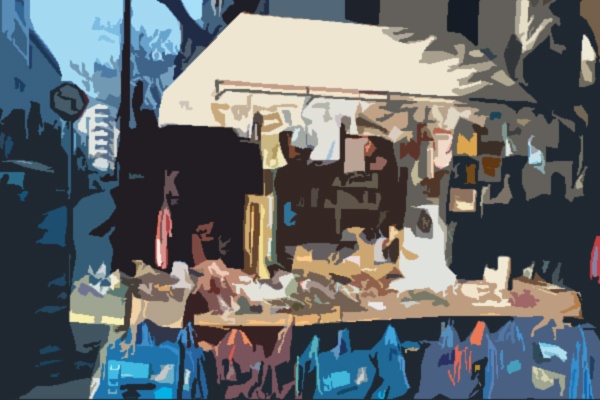 If you notice the kiosks portrayed in the old Greek movies shown every now and then on TV, you will realize how much this form of small business has changed over time. Contemporary kiosks have little in common with their predecessors. Those early kiosks were a crowd of rickety orangey boxes fitted with trapdoors at the rear, where war veterans or their relatives sold a limited range of goods, chiefly cigarettes, newspapers, and condoms. The modern equivalent is big, bright, often adorned by cigarette ads (hence, colorful), with at least one upright refrigerator (the kiosk outside the metro station at Kerameikos sports no less than five, which hold a varied collection of soft drinks and semi-alcoholic beverages!), and one or more ice cream chest freezers; it carries a bounty of products and – more importantly – has a proper door through which vendors walk in and out standing upright. The kiosk's distinctive feature is that the products it sells are selected to cater to local demand. Kiosks at Syntagma, for example, double as newsstands for international (see: western) newspapers, while those at Omonia mostly carry newspapers from the East. But the real party is taking place over at Athinas Street. Τhe kiosk that stands at the intersection of Athinas and Kratinou, to the left of the City Hall, sells CDs and... cassettes (yes, they are still around) of folk music to the wondering country folk. It is worth mentioning that this particular kiosk has also been the headquarters of a record label! Yet it is not the only kiosk in Athens to have broken the mold. And it is not just newspapers that are being given up as proper kiosk stock, but also, in some cases, cigarettes, the average Greek's indisputable fetish! What do they sell? Hardware (on stalls specially set up for the occasion), purses and bags, scarves and assorted neck warmers, gloves, hats, belts, eyeglasses and sunglasses, diaries and almanacs, candles, incense, religious icons, wallets, flashlights, playing card decks, and many more depending on the location. Pictured here is the kiosk at the intersection of Athinas and Lykourgou St.