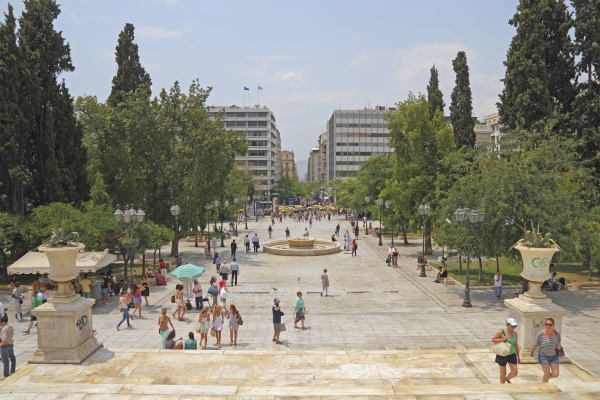 The historic centre of Athens forms a triangular shape which has plenty to offer to the visitor. Bordered by the streets of Stadiou, Athinas and Ermou, it is the homebase of art, finance, enterprises and politics in Greece and as such a perpetually buzzing, lively, busy area. To fully experience the centre of Athens you have to walk it. In fact, it is a pity not to stroll around and have a glance at its numerous neoclassical buildings and landmarks.

Syntagma Sq. is as a good a spot as any to begin your exploration of the centre. The most socially important and famous square of Greece is named after the Constitution (‘Syntagma’) King Otto was forced to grant to the people following an uprising on 3 September 1843.

Above the square lies the House of the Parliament and the Tomb of the Unknown Soldier, both popular landmarks among visitors. But it is the ceremonial changing of the guard (the so-called tsoliades or evzones) that occurs on the hour that invariably attracts large crowds and photographs. Tourists love being photographed next to the evzones and their impressive traditional attires, including the dress known as foustanella. On Sundays and public holidays, the change of the presidential guard takes place with an official ceremony including a military band. The evzones march in group formation at 11:00.

Syntagma is also a hub for various means of transportation, such as Metro lines 2 and 3, tram, various bus lines and special express buses to the airport. It is a regular hangout spot for skaters, teenagers, elderly people basking in the sun on one of the benches around the square, people using it as a meeting spot and the ubiquitous pigeons. Various festivities and events are held here. It has also been a standard spot for the gathering of large crowds, mass protests and demonstrations.

In close proximity to Syntagma sq. lie a number of landmarks, including the National Gardens and Zappeion, and the Temple of the Olympian Zeus and the Hadrian’s Arch. Other memorable buildings include the Maximou Megaron and the Presidential Mansion at Irodou Attikou str., official residence of the Prime Minister and the President of the Hellenic Republic respectively. Entering the National Garden and past Zappeion one comes across the majestic Panathenaic Stadium.

In the opposite direction, walking along the sprawling Panepistimiou str., will lead you to the so-called trilogy of important buildings built in neoclassical style during the 19th century: the National Library, the University and the National Academy. Panepistimiou concludes in the other famous (and ever-renovated) square, Omonia. A few surviving neoclassical buildings come as a welcome contrast to the concrete of the square. Numerous street traders, vendors and lottery ticket sellers make up the colourful crowd of Omonia.

Stadiou str. that runs parallel to Panepistimiou features the squares of Klafthmonos and Kolokotroni - the latter easily discernible by the statue of Greek national hero Theodoros Kolokotronis riding his horse into battle. Visitors can also spot the building of the old Greek Parliament (functioning as the National Historical Museum) and enjoy drinks in the numerous tiny bars along Kolokotroni str. and the nearby Karitsi sq.