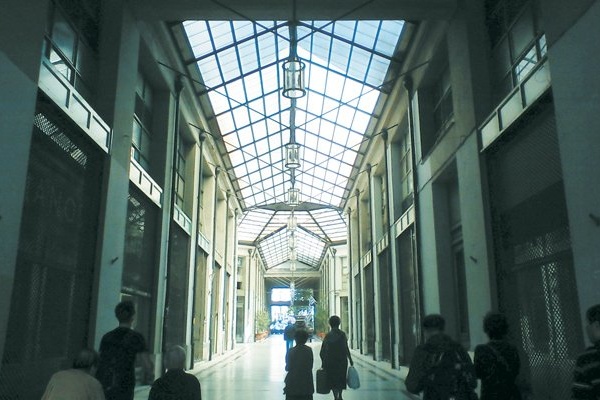 Passagenwerk, better known by its English title as the Arcades Project, Walter Benjamin's celebrated unfinished magnum opus published posthumously is no more than a compilation of rambling notes, although scholars agree that had it been completed, it would provide a systematic record of Paris' covered walkways in the nineteenth century. If as great a thinker as Benjamin was fascinated by the arcade to the point of forgetting himself and his own theories, one can only imagine the fascination this particular urban structure exerts over the common man – myself, at any rate.

Now as far as Athens is concerned I doubt that there is a nineteenth century building with a passageway attached to it. Twentieth century buildings are more likely to have one, as space at the heart of the city is by then increasingly in short supply, shades are hard to find, streets are becoming busier, and the needs of smaller businesses are being acknowledged (small business owners not willing to own or rent spaces that have street frontage, at the same time that the state is lowering the standards for commercial spaces of this kind.) These are the conditions of which the city's covered walkways were born, among which the tertiary sector of the economy, that is the services and commerce sector, played a decisive part.

There are underground and ground-level passageways (sometimes a single building has both), covered entirely, or featuring a colonnade on one side, blind or open on one or both ends, anonymous or eponymous, well-lit or dark, long, or minuscule. A tiny little street stands out among them, Aristeidou, barely a city block long in between Sofokleous and Evripidou, whose east side is taken up entirely by underground walkways all bordering the city's ancient wall, which is partly preserved in the foundations of modern apartment buildings.

Downtown Athens is practically filled with arcades is various shapes and sizes: picture the letters Ι, Ε, Ξ (line in the middle and all), Η, Γ, Π, S, etc. Literally hundreds of them line the perimeter that stretches around the urban nucleus Syntagma-Kolonaki-Exarcheia-Kaningos-Vathi-Omonia-Psyri-Monastiraki-Plaka-Syntagma. There are streets where there are more walkways to be found along the way than the intersections with other streets: Ermou, Charilaou Trikoupi, Themistokleous, Aghiou Markou, Kolokotroni, Panepistimiou, Stadiou, Evripidou, Aeolou. He who knows how to navigate the city's arcades, knows how to take a shortcut, escape possible stalkers, or simply lose himself in different worlds.

There is the “Rio Janeiro” passageway, properly called the Civil Servants Arcade. Open on both ends, it takes you from Stadiou Street at Omonia Square all the way to Lykourgou Street. It owes its name to the long-lived local cafe. It was at the New Point Billiard Hall, located in the underground sibling of the ground-level arcade, that I learned how to play ping-pong.

The Stoa Emboriou (or Commercial Arcade) takes you from Voulis Street to Lekka, at Syntagma Square. It is located on the ground floor of the building known as the Merchants Fund, a landmark of interwar architecture designed by Leonidas Bonis and Emmanuel Lazaridis. Recently, it has been housing a series of art events, titled “Ichne Emboriou” (Traces of Commerce).

Last but not least, the Munchies Arcade or Penguin Arcade (officially Trikoupi Arcade) leads from Patission street, at number 10, to Dorou Street at Omonia Square. It is filled with food joints, hence the humorous name.