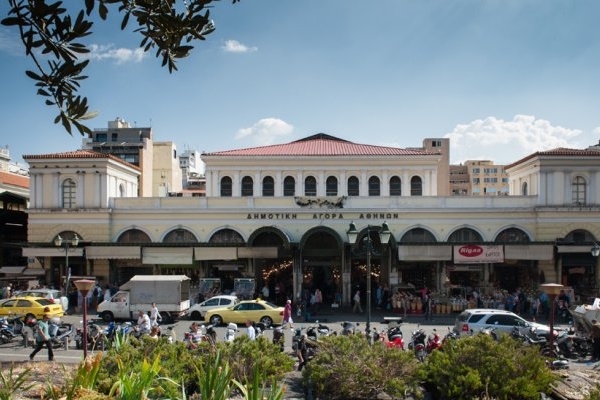 Bursting with colours, smells and people, Athinas street turned 181 years old and has a lot of amazing stories to tell.

Strolling up and down

All kinds of shops with food and spices, clothes, tools, church stuff and a couple of cafés make up the majority of commercial activity on Athinas street. Plus dozens of stalls. A scale is three Euros, a massage device one Euro, a pencil case full of markers is also one Euro. One of the shops is called “Fthinopolis” (CheapTown). And almost all of them have some kind of sale going on all the time. On Ethnikis Antistaseos square across City Hall, the pigeons are so accustomed to passersby, they don't even flick a feather when you walk past them. They drink their water from potholes on the pavement and stare at the caged birds at the corner pet shop. On the other window you can see dogs and cats in glass houses barely one by one meter large.

Across the street from Varvakios Market, between Armodiou and Aristogeitonos streets, you can find vegetables, fruit, all kinds of meat, cheese, eggs and even antiques and all sorts of old stuff. There is a really old and dusty iron, which has surely paid its dues to its former owner, now waiting at the bottom of the shop window, practically on the pavement, anticipating the future which could be either in the house of an antique lover or in an iron wasteland.

At the bottom of Aristogeitonos street, there is an elderly woman working there since 1970. The shop sells eggs, only eggs, which vary in prices between 10 and 17 cents each according to their weight.

Some architectural facts. On Athinas street number 4, you can find one of the earlier street architecture sites. It is an 1850 building, constructed to house a residence on the first floor and shops at ground level. It is a typical sample of Athens classicism with pediments on top and beams with Corinthian capitals. On the corner of Athinas and Agias Eirinis there is a building representing the modern movement of the 20th Century. On 16 Athinas street, the building now used by Alpha Bank was built in 1900. On 40 Athinas street, at the corner with Evripidou street, the abandoned three storey hotel “Venetia” was constructed in the last quarter of the 19th Century and is a typical building demonstrating the peak of the Athenian classical period. On Athinas street stands one of the architectural gems of the city, the Athens City Hall building. The construction, based on Pangiotis Kalkos’ study and design, was decided while Kyriakou was mayor in 1871, after a loan of 130.000 drachmas was made out by the National Bank. The austere neoclassical design of the two storey building was directly influenced by the Palace architecture, while the construction lasted a mere two years.

● ● ● At the top of the street (Monastiraki) at the end of the 19th Century the merchant Yusurum had an antiques shop. This whole area eventually was named after him.

● ● ● During “Dekemvriana”, in the Greek Civil War, Monastiraki and Psirri was controlled by ELAS (the Greek People’s Liberation Army), while Omonia by the British. This turned Athinas street into a constant battlefield.

● ● ● The construction of the Varvakios Town Market (Athinas 42) begun in 1878 and was financed by the national benefactor Ioannis Varvakis. In 1884 a fire burned all the old wooden shacks, dating from the Turkish occupation, to the ground. The new market was completed in 1886 and is fully functional since.

● ● ● At number 28, there is the little church of Agia Kyriaki, which was constructed during the Turkish occupation. Rumors have it that exorcisms were performed in this church. Next door at number 30, the building was shared by the Church Radio Station and the American Flea Market.

● ● ● When in 1833, the architects Kleanthis and Schaubert made a first plan of the city, Athinas street was supposed to reach the entrance of the Acropolis. The overall plan, placing the palace on Omonia Square was never implemented since it was deemed costly.