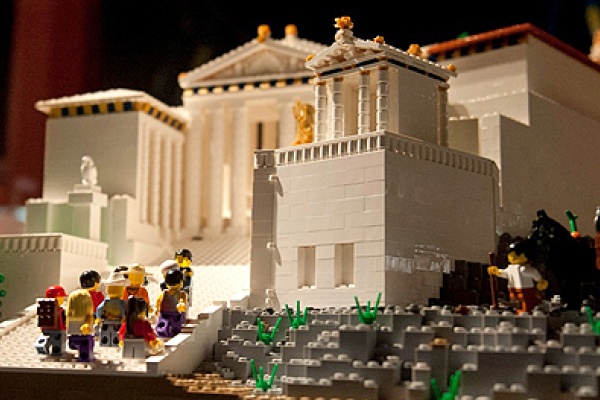 Among the wonders of the ancient Greek civilization, an equally fascinating and rather extraordinary “artifact” will also be displayed in the Acropolis Museum, as of a beautiful and generous gesture of the Nicholson Museum in Sydney, which gifted a replica of the Acropolis of Athens created entirely by LEGO bricks. As Michael Turner, senior curator of the Nicholson Museum wittily put it, “Maybe the British Museum refuses to give back the Elgin Marbles but we will offer an entire Acropolis as a gift to the Acropolis Museum”.

The LEGO Acropolis was created by LEGO-certified professional Ryan McNaught. The project took him about 300 hours to build and he has used more than 120,000 little LEGO bricks.

The work shows Acropolis in all its glory, featuring models of Parthenon, the Temple of Athena Nike, the smaller temple of Erechtheion and the site’s monumental gateway, Propylaea, while many ancient figures are also spotted in the surrounding, such as LEGO Theseus in the labyrinth facing a LEGO Minotaur, LEGO Oedipus, LEGO Elton John performing for tourists or LEGO Lord Elgin stealing the marble statues of the Parthenon.

When exhibited at the Nicholson Museum, LEGO Acropolis has attracted more than 100,000 visitors, while its last exhibit, LEGO Colosseum, in 2012, attracted 90,000 visitors.

The next LEGO project to be presented at the Nicholson Museum is LEGO Pompeii, in January.