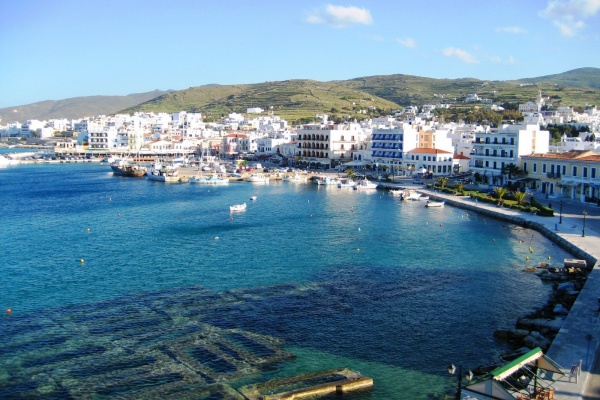 Religious reverence, unmatched food, picturesque villages and a lot more, await the visitor on the island of Tinos.

Obviously, Panagia of Tinos is a must, as is the red carpet on which pilgrims crawl on their knees on their way to the Virgin Mary church. History buffs should not miss the monument of Elli, the cruiser destroyed on the 15th of August 1940. Pyrgos is the largest village of Tinos and one of the most picturesque of the Cyclades. Do not bother going with a car, as they are not allowed there. After visiting the house of greek artist Chalepas, take a walk along the beautiful narrow routes and grab a coffee in the square with the grand plane tree (the revolution of 1821 on the island commenced on this spot). The Pisistrato aqueduct, which provided the town’s water supply until 1934, is also a great site. The beautiful abbey of Ursulines at Loutra was founded in 1862 and is worth a visit. In its courtyard, you can enjoy multiple cultural events. In order to enter the village of Tarabado, you must pass under a Medieval arch before you can admire the infamous dovecotes of the 16th century. In order to find them, follow the instructions on the marble plaque. Isternia, has been one of the most important centers for marble carving. The village of Isternia features a grandiose church, and a majestic view of the open sea, thanks to its panoramic location. Furthermore, one can visit the few museums of the island: Museum of marble carving (Pyrgos,+302283031290) which was built by the Piraeus Bank Group Cultural Foundation, the House - Museum of Giannoulis Chalepa (Pyrgos,+302283031262), the Μuseum of contemporary art “Kostas Tsoklis” (Kampos, +302283051009, open from May 1st to September 30th).

The most organized beach of the island, and its largest, is Aghios Fokas. It is accesible on foot from Chora. For peace and quiet, go a bit further up to the end of the beach at Kionia. When Northern winds hit the island, avoid Livada which has stones, rocks and deep waters. The beach of Rocharis in the North is organized too and is close to the beautiful village of Panormos. For quieter and remote escapes, try Aghios Petros which features fine sand and shallow waters. The church by the same name is located there since the 16th century. Pachia Ammos has huge sand-dunes and clean waters. If you fancy games on the sand, it will become your favourite. Another of the most beautiful beaches is Apigania. It is not accessed easily (lots of walking required), but you’ll think it was well worth it, once you come across its beautiful crystal clear waters. Do not forget to bring drinking water with you.

For homemade pasta produced daily and a pleasant atmosphere where everyone enjoys cocktails prepared by the awarded mixologist George Tsirikos, do pay a visit to Dough and Shaker (+302283031119), in Pyrgos. To Koutouki tis Elenis (+302283024857) is located at the market area at Chora. Sit at the small charming courtyard and enjoy Greek cuisine at its best. Many wonderfull traditional recipies based on local products. In Isternia, at Exo Meria (+302283031552), from 9 am until 5 pm, you can enjoy a tasteful brunch, with croque madame, eggs etc. With an unmatched balcony, the place serves food all day long and do try the homemade pizza, made with local ingredients. During the evening hours, it transforms into a bar, where live music is often played. Marathia (+302283023249) is a restaurant by the seaside, next to Agios Fokas beach. Nearby, you can find San to alati (+302283029266) in a beautiful location. In Chora, the beloved Itan ena mikro karavi (+302283022818) offers Greek cuisine with a twist. Located near the sea and operating in a yard filled with green is Aithrio o Markos (+302283023033). Definitely try the rustic omelet. In Panormos, go to Marina (+302283031314) for the exquisite Fisherman’s pasta. It contains great seafood. In Ormo of Isternia, Thalassaki (+302283031366) is a well-known tavern of Tinos.

Where to have fun