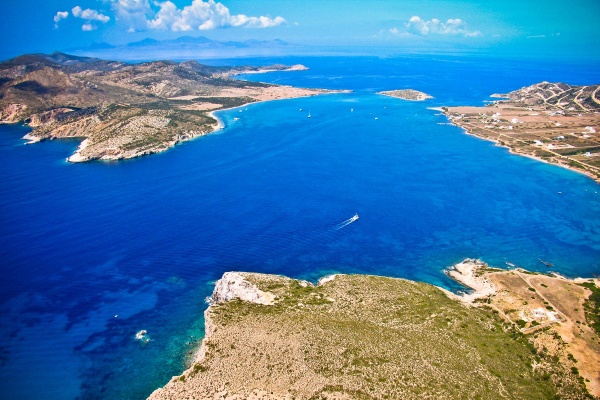 At the very centre of Cyclades, Antiparos is a small island connected to Paros with local ferries. It is surrounded by tens of even smaller and uninhabited islands, among which Despotiko, Tsimintiri and Stroggylo. The oldest stalagmite in geological history, 45 million years old, hides in the bowels of a 100 meters depth cavern at Despotiko. For the fearless and athletic, a stairway of 411 iron stairs stand between the site and the surface entrance of the cavern, in case you feel like exploring.

Though the landscape of Antiparos switches from the vast and fertile green hills of the north to the rough and arid terrain of the east, and from the sandy beaches to the remote rocky bays with the amazingly blue-green waters, the unrivalled Cycladic architecture, the picturesque windmills, the small churches, the graphic, wildly coloured by the flowers bursting yards of the houses, streets, all contribute to the immense beauty of the island.

Despite its size, Antiparos is a popular summer destination for Greek and European visitors.

The historical centre of the island is situated in a Venetian castle that gives access to the coastal shopping street. The settlements of Agios Georgios in the southwest edge, Soros and Kampos are equally beautiful and popular for their lovely beaches.

Theologos beach is the one closer to the camping site of the island. It has particularly shallow waters; you can walk for several minutes into the sea. Psaralyki, Deyteri (second) Psaralyki and Triti (third) Psaralyki are stretching “arow”, the one after the other. Well organized under nature’s protective shades, with beach bars and sunbeds, all three, and equipped for water activities. Distances are not an issue in Antiparos. You can easily move around the island with your bike. There is also local bus transportation that takes you to almost every beach on the east and west coast, and also stops at Spileo, Livadia, Monastiria and Glyfa beaches. The bay of Monastiria is found between two hills and its seabed is marvelous. The dirt road leading to Kampos is rough; you’ll find it fascinating with a twist of adventure. Soros, Sifneiko and Vathis Volos are also beautiful to swim. From Agios Georgios you can get the boat to Despotiko with its “black” sandy beach.

The “old time classic” camping “Antiparos” for the easy going and free spirited. The beach nearby is preferred by nudists.

Plenty of traditional small taverns you will find around the island’s port area. Maki’s tavern stands out. If you want something easy-to-make and quick there are three good “souvlaki” joints at Chora. At Romvi Café by the beach near the Newsstand, enjoy your breakfast while reading to your newspaper. Also for breakfast, Nisilos Café opens as early as 8:30 in the morning. Right in the middle of the pedestrian street, there is Yannis Place, always full with happy faces. A few meters left, you’ll find Klimataria, serving only at night.

At Agios Georgios, make a stop at Captain Pipinos (+30 21823) for ouzo, after swimming. You can see the octopuses hanging under the sun; they make the perfect ouzo delicacies.

Great cocktails at Soul Sugar, and mainstream music in the, always, brimful Smile. Old time classic and both close to the square are Tzitzikas and Boogallo. La Luna disco is the best choice for the after hours.