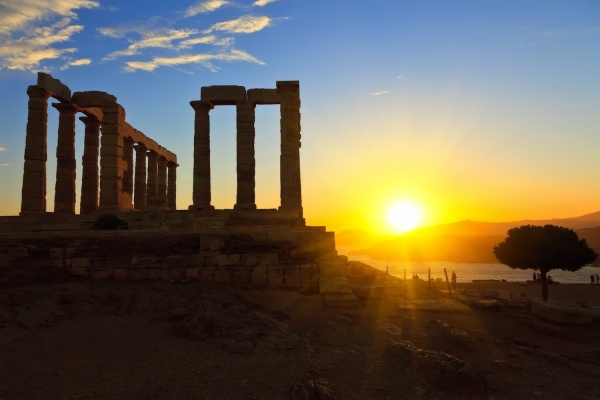 Spring, entirely: the sun, the heat and the blooming flowers; a powerful force sheers you off to some beach. You might as well take the first dive.

At this point in the year, when summer holidays are finally in sight however still seem so far away, and an unpleasant feeling of being trapped within the “city walls” is surfacing more often, a day-excursion out in the country will pull you out of an inevitable melancholy.

The countryside is gorgeous in spring time and Athens, thankfully, is surrounded by beautiful and easy-to-reach escape destinations, which smell summer already. A day trip to Sounio, for example, sounds like a good start, spontaneous, unplanned and unorganized.

Sounio is on the capital’s “doorstep”, perfect if you are in pursuit of some “summer” ahead of schedule.

The Temple of Poseidon, its famous landmark, perched atop the craggy cape rock, overlooks the vast blue Aegean. The sad fate of an ancient king has left an indelible stain on the white marble. Looking out to the horizon for his son’s return from Crete, Aegeus, King of Athens, jumped to his death in desperation, from this very spot, when he spotted the black sails on his son Theseus’s ship, mistaken in his belief that his son had been killed. Theseus had sailed to Crete to kill the Minotaur. Aegeus told him to put up white sails upon his return if he had succeeded in killing the beast. Theseus had just forgotten this instruction. The temple stands grandiose and sparkling under the sun, keeping the tragedy well hidden in eternity. Lighted up during the night, it looks even more magnificent and enchanting.

Take the route that passes through Lavrio. The hills by the country road are bursting with poppies, daisies and small flowers of all kinds of shapes and aromas. Nature in full colors rolls all the way down to the sea. The small towns and villages scattered along the way are swarming with pre-summer life. Shops, cafes, kiosks, taverns, the sea, they all promise the near coming of summer.

On the main road, at the traditional “Syrtaki” tavern you’ll find it difficult to resist to the mezes varieties the guys there suggest. They are all delicious. It serves masterly grilled foods and calamari. On weekends the place is packed with people, the veranda overlooking the sea surrounded by green trees, gives you the impression you are eating out on a mountain top emerging from the sea or at an island the least, even though you are, still, on a road on the mainland.

In the actual city of Lavrio there are plenty of places featuring different events every day of the week: “Loftfortynine” gathers all the crowd, outside and in, playing great music… Actually it is great for certain age groups (17-27; maybe even for well maintained 37…) “Loftfortynine” is one of Lavrio’s hot spots, up to date and well thought of - and yes you will of course check out their schedule on Facebook. Or you will simply enjoy a cocktail outside not far away from the sea. “Aqua” is a similar place, also hip - not to use the word “trendy” - situated next to the Town Hall where nightlife kicks off.

Further next to the “Aqua” you will find the “Remezzo Bistrot”, patisseries and huge multi-culti bakeries – the “Village Bakery” featuring delicious moustokouloura, the “Epiros bakery” where you can have rusks and pies possibly from Epirus, the “Chocolat” a patisserie making an amazing lemon pie, as well as bars, cafes and shops one next to the other as far as your eye can see. This is a wonderful feature in summer towns being able to do all the bar-hopping you want and feel like you are far away from the big city, while actually you are not.

Back in beautiful Sounio, the flowers are blooming, the partridges are coming and going like well- fed princesses, now that no one is shooting at them. They are actually singing to a tune which sounds like iou – iou – iou and while it is not exactly a song it makes you glad to be alive and kicking, and picking flowers in the spring Attiki countryside like not one day has gone by…