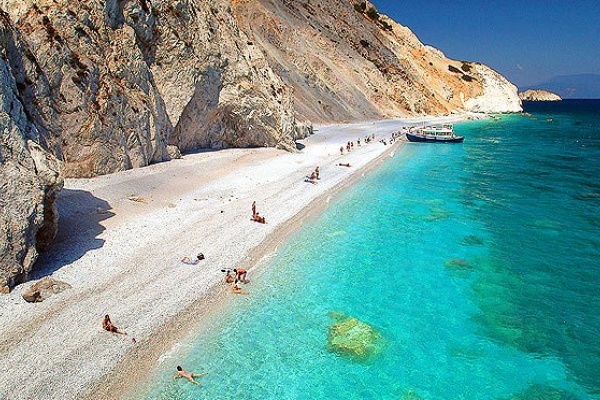 The captivating, almost unspoiled scenery, its people and traditions, have been celebrated worldwide through Hollywood’s blockbuster Mamma Mia that was filmed here. Nature has been extremely generous on Skiathos, the cosmopolitan “paradise” of the Northern Sporades, just off the north-east coast of Euboea. Its transparent blue waters and vast pine forests attract thousands of young visitors every year. Alexandros Papadiamantis, one of Greece’s most famous and influential Greek writers, was born and raised here.

Skiathos’s architecture is an inspiring, and rare for the Greek islands, combination of the eastern-central Greece architecture of Pelio, and the island village architecture, with neoclassical elements. The city of Skiathos, Chora, is the only built-up settlement on the island, situated on the ruins of the ancient city. Chora cascades down the surrounding hills to the old harbour; the sight is almost magical during the night, under the glimmer of its lights. The view from Chora is breathtaking. Walking around its stoned paved streets you’ll find beautiful, picturesque little squares and the house of Alexandros Papadiamantis, one of the most significant cultural sites of Skiathos. The house was converted into a museum dedicated to the life of the writer, the house and is located in a narrow dead-end street by the eastern coast of the city.

The landmark of Skiathos however is Bourtzi, a small peninsula that separates the port of Skiathos in two. From the fort of Bourtzi the Skiathians repelled the Turks in 1823. Today, within the site of the old fort, a cultural centre is operating with the initiative of the present municipal authorities, with conference rooms and a summer theatre which hosts theatrical and musical performances every summer.

The Castle (Kastro), an integral part of the island’s history, is located on the northern part of the island. To reach the Castle, you can either drive a 4x4 vehicle or walk, but it is definitely worth the walking. In the past the Skiathians had built their city there as it offered natural protection from the pirates, which the inhabitants reinforced with walls, and cannons. Today, only the cannon of Anagia is saved.

The churches and monasteries of Skiathos represent the island’s strong religious traditions.

At the Monastery of Panayia Ikonistria, a miraculous icon of the Holy Mother is kept. You will be astonished by the belfry at the Panayia Limnia. At Gennisi tou Christou Papadiamantis’ found his inspiration for his Christmas Novels, at the Monastery of Eyaggelistrias, Father Niphon swore in Theodore Kolokotronis, Andreas Miaoulis, and many other Greek leaders before the rise of the Greek revolution against the Turks in 1821.

Skiathos has almost 60 beautiful beaches. The most famous however is Koukounaries, declared the third most beautiful beach in the Mediterranean. It is an endless sandy beach, surrounded by pine trees and with the Strofilia wetland nearby.

Megali Ammos with its crystal waters and its ouzo-taverns is also highly appreciated, on the road from Chora to Koukounaries.

The Vassilias beach with its almost golden sandy line has its own significant history. Byzantine emperors preferred these waters for their holidays.

At Ahladies you’ll find almost all conveniences, from the umbrellas and the sunbeds to a variety of water sports.

At Kalamaki Kape, there are Sklithri and Tzaneria beaches, with huge shady plane trees and taverns, and the most beautiful moon during summer nights.

The pine trees at Kolio, Agia Paraskevi and Troulos beaches reach down the water edge.

If you are up to more crowded and intense experiences, Ampelakia and Banana beaches would be your top choice. Vast green surrounding, all kind of sports facilities, taverns, coffee-bars, young faces, non-stop day and night fun.

For more “peace and quiet”, prefer Agia Eleni, Mandraki and Aselinos, on the north side of the island.

If you feel like hiking, the road to Kehria and the beach right under the Castle will prove extremely compensating.

You’ll visit Lalaria only by boat, and relax on the pebbles of Trypia Petra, Xanemos and Tsougkrias.

Mandraki Village (+30 49301-03-04 www.mandraki-skiathos.gr), at Koukounaries, one step away from the island’s legendary beach, with the Elia’s Restaurant for drinks and cocktails, the White Bar for snacks by the pool and the White Barbeque with live music once a week.

La Piscine Art Hotel (+30 21350, +30 29231), the luxury 4 stars hotel with its exclusive high design, and four different types of rooms, junior, executive suites, standard and deluxe. The Crazy Cow has a restaurant by the pool with a top reputation for its Mediterranean cuisine created by organic ingredients.

Kivo Hotel & Suites, at Vassilias beach (+30 22407), climbs up a hill offering a great view to the Aegean. At the hotel’s restaurant, the Sea View, you’ll love the romantic atmosphere along with a variety of excellent wines.

A cosmopolitan choice is also the Skiathos Palace, at Koukounaries (+30 49700).

The Elia’s Restaurant, in the Mandraki Village Hotel gets high scores and top reviews. Open from 14:00 until late at night.

On the eastern coast of Chora, there is Scuna. A 1960 establishment with “homemade” flavours, a big range of wine labels, romantic atmosphere and beautiful music.

Right between the old and the new harbour, facing Bourtzi, there is El Greco (+30 23311), elegant interior and selected Mediterranean dishes.

Near the City Hall, at the harbour, you’ll find Dolce, for delicious waffles and pancakes.

Also for pancakes, burgers, hotdogs and all kinds of sangwitches, you can go to Tsak-Bam (+30 29900), also located at the city centre.

At Pillows, the all day coffee and drinks bar at the old harbour, where you will literally drink, your coffee or freshly squeezed juices or your cocktails and drinks as night falls, on huge relaxing pillows and comfortable sofas.

At the all day coffee bar, Gold Fish, between the old and the new harbour, you’ll listen to lounge and mainstream music and drink coffee and refreshments during the day and highly “elaborated” summer cocktails at night.

On the coast of Ampelakia, near Koukounaries, you can go to the Mystique Beach bar & restaurant, for the “full frolic package”, while on the tropical scenery of the Banana beach, you’ll drink cocktails at Bananistas, while dancing the dj’s summer rhythms.