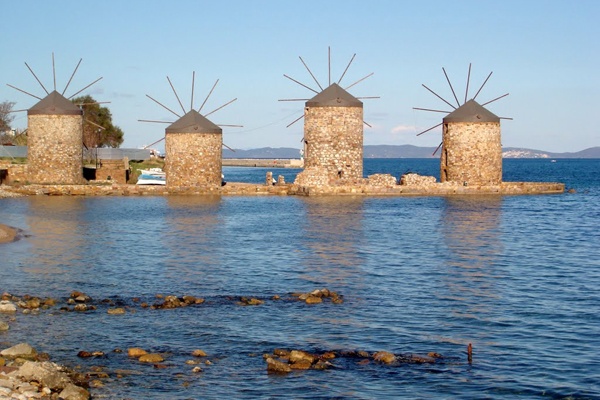 A mosaic of contrasting sceneries from the harsh rocky north to the vast plains of the south, scented by the overwhelming aromas of wild rose, mastic and tangerine, Chios possesses many faces, all of striking beauty and grace so intense that attest to its Homeric origins and its rich Byzantine tradition.

The internationally infamous mastic or masticha is produced here in the fertile tree gardens of the south, where the great Mastichochoria, the seven mastic villages are settled, Pyrgi, Mesta, Olυmpi, Kalamoti, Vessa, Lithi and Elata, all of unique architectural and cultural interest.

Visit the bay of Komi and the ancient village of Emporio on the south coast and the regions of Vrontados and Kampos. The main city of Chios, Chora, rests on the south wrapping within the harbour of the island and the medieval castle, inhabited and with many small coffee shops and restaurants for quick stops.

Right in the centre of the island, visit the 11th century monastery of Nea Moni, a World Heritage Site by Unesco and on the east the villages of Kardamyla, Lagkadas and Sykiadas.

The most popular beach on the island is Karfas, extremely beautiful, well organized and in a small distance from the main city. Following the same “pattern” and equally close is Megas Limnionas, also preferred highly by the locals. Moving north, there is Daskalopetra, with its white pebbles and Glaropoulia, near Lagkadas, for great dives. On the road to Kardamyla, you’ll find Yiossonas and Nagos, and on the southwest you’ll go to Agia Markella, Limnes and Managros beaches.

The beach at Lithi with its shallow waters, is ideal for small children. Also great is Elinda, hidden between Limnia and Lithi. Agia Fotini, Agios Aimilianos and Agia Fotia, all organized and covered by beautiful white pebbles, are stretching on the southeast. To complete the picturesque coastal circle you’ll visit Komi beach with its dunes, Vroulidia and Emporios, or Mavra Volia, as the locals call it, because of its black volcanic pebble “cloak”.

You’ll love the food wherever you go. Fresh fish, juicy meat, pies, traditional recipes and the island’s excellent ouzo are served in almost all restaurants and tavernas. Hotzas is one of the oldest establishments on the island, perfect. At Thymiana, the Roussiko has great local cuisine. Pyrgos and Fabrica serve delicious food also. At Mesta and Armolia and the other northern villages you’ll find the best traditional delicacies, their smells when cooked fill the air of the villages’ squares. If you are more of the European cuisine, the Italians La Bussola and Alati & Piperi stand out.

All night clubbing at Cosmo, Barcode, Sueno, Remezzo and Metropolis, however you’ll have the best drinking and dancing experiences at the islands “panygiria”, the local festivities, plenty during summer, like the one at Pyrgi on the 15th of August.