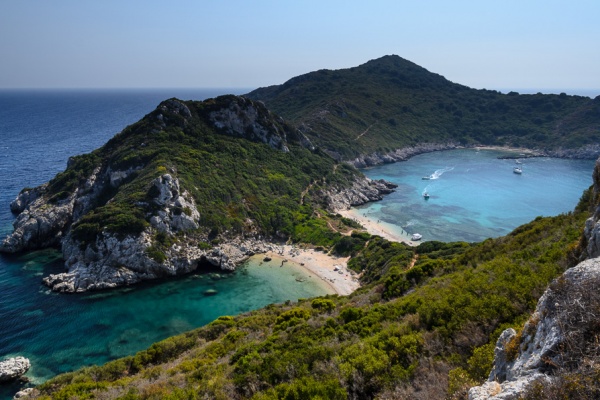 Chalikounas: Rocky facade giving way to a sandy beach. It is preferred by the ones avoiding big crowds and by surfers. Kontogialos: it was a hippie hideout in the seventies and a very popular beach nowadays. Pine trees, olive trees, golden sand, big waves. Palaiokastritsa: it is the busiest beach on the island mainly due to the sea caverns that you can visit by boat. Glyfada: Shallow waters, advanced infrastructure, water sports. Ermones: it is a small enclosed cove surrounded by tall steep rocks. Ai Gordis: nesting at the foot of an evergreen mountain surrounded by olive trees and vines. Extra fine sand and bluish green waters. Myrtiotissa: nature loving nudists 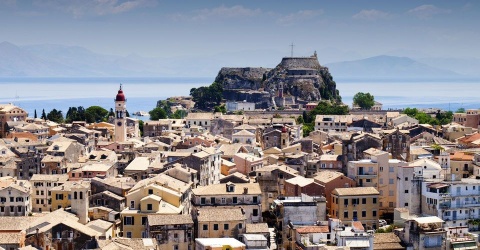 Corfu Palace (+30 39486): Luxury 400m from the Town centre, overlooking Garitsa bay and the Old Fortress. Cavalieri (+30 39041, +30 39336): An old time mansion for those who appreciate the cinematographic ambiance. Arcadion (+30 37670): it is also a refurbished old town mansion with a view of the Old Fortress, is is on the Spiniada and is considered one of the highest standards hotel in town. Aquis Corfu Holiday Palace (+30 36540): there was a James Bond movie filmed in the premises. At Kanoni: Kontokali Bay (+30 99000). It is a rooms and bungalows complex, built on cape Kontokali. Bougainvilleas, pine trees, cypresses, unimpeded view of the Ionian islands, the Epirus coastline and the Gouvies marina. Park Hotel (+30 91310, +30 91347, +30 90107). Situated at a former fishing village which has evolved during the last decades into one of the islands most saught after destinations, Gouvia. Levant Hotel (+30 94230, +30 94335). The most romantic of all. Situated at the Pelekas hilltop, two steps away from the Kaiser's observatory which oversees all of the west coast.

Inside (Kapodistriou 8, +30 20460). It's a coffee bar emphasizing on the bar side, which becomes clubbing as the night advances. Beats, beaks and popular r'n'b' hits, well chosen house music you won' t hear anywhere else and a well educated cellar. Bristol (Eugeniou Voulgareos 49, +30 60101). You will find it in remodeled site in the old town, surrounded by architectural monuments and stone paved streets giving it an almost mystical ambiance and making it the most popular bar in town specializing in funk and nu – disco. Hook (Kapodistriou 12, Pano Plateia, +30 27333). It is overwhelmingly similar to a clubbing arena  as you first lay eyes on it from the Pano Plateia stairs. Petra (Kontogyalos, +30 6947250848). It is round, made of stone, finely decorated in the unadulterated setting of Kontagyalos while the super sized windows offer you the most romantic view you can ask for on this island. Always busy. Mikro Cafe (N. Theotoki & Th. Kotardou 42, +30 31009). It is in full harmony with the surrounding residential tradition of the old town center, spreading its tables in the kantounia (narrow alleys) of the Agios Vasileios district while the music plays along discreetly. Aloha beach bar (Glyfada, +30 94380) Ionian sea fun , guest Djs, beach volley tournaments, ice cold cervezas, shots, tanned half naked bodies and all that in cosmopolitan Glyfada.