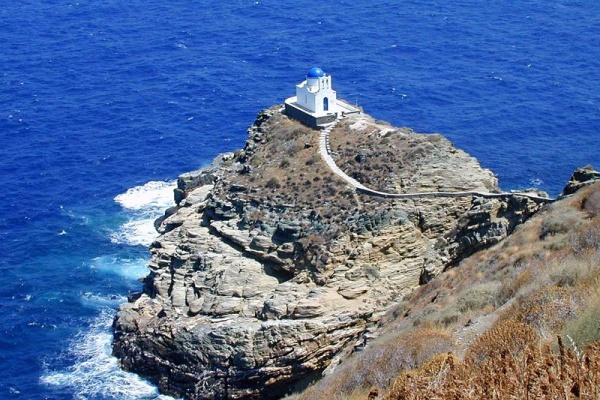 The island of Sifnos, soaked in the aromas of thyme and sage, is a testament the cultural richness and grandiose beauty of the Cyclades. The blinding white of its traditional settlements, a mixture of wisely planned urban aesthetics and folklore architecture, is perfectly balanced with the imposing landscape and attests to the harmonious coexistence of man and nature.

Visit the monastery of Prophitis Ilias Apsilos, built on the ruins of an ancient citadel, high on the top of the homonymous and highest mountain of Sifnos. The historical monastery of Agios Ioannis Chrysostomos in Kato Petali, where, according to the tradition, the first Greek school of the island was established in its grounds. The monastery of Panayia tou Vounou (Virgin Mary of the Mountain), on the road from Apollonia to Vathi, features amazing architectural beauty and a lovely view to the village, the beach of Platis Gialos and the small island of Kipriani. Also, the 16th century Monastery of Panayia of Firogia, on your way to Vathi village. Come see the traditional fairs hosted in the monasteries, an unforgettable experience.

The exploitation of Sifno’s underground “treasures” of copper and zinc from the ancient times, brought wealth to its people and development to the island. The sites of the ancient mines extend from the north-east to south-west, at the locations of Agios Sostis, Agios Silvestros, Vorini, Kapsalo and Xeroxilo.

Sifnos is famous for its pottery art, practiced since the ancient times.

Visit the Small Museum of Modern Pottery in the monastery of Firogia. Other museums you could visit include the Archeological Museum of Sifnos, at Kastro and the Folklore Museum of the Association of the Sifnians, at Apollonia.

At Platis Yialos, well organized and with a cosmopolitan atmosphere. If you prefer more secluded waters, you should go to Herronisos. Also private is the Fasolou beach, with trees that provide natural shade and a small traditional taverna. For those with more extreme tastes, you could choose the rocky Epta Martyres beach. Close to port, you’ll find the Kamares beach.

At Ano Petali: From the pool of The Petali Village Hotel & Restaurant (+30 33024) you’ll have a great view to the island.

At Apollonia: The Patriarca Boutique Hotel (+30 32400 www.patriarca.gr) is a 1650 building of traditional architecture, fully and elegantly renovated.

If you fancy “starred” and luxurious stay, the Elies Resorts at Vathi will sufficiently provide.

At Platis Yialos, there is the «Ω3» Restaurant.

At Seralia, Vatrahia restaurant offers great seafood and, upon nightfall, the breathtaking view of the moon rising on the horizon.

On the crowded street of Apollonia, try the local recipes at Cayenne, and at Tou Apostoli to Koutouki (+30 33186), enjoy its delightfully cooked dishes.

At Kamares, the Osteria da Claudio has the best Italian cuisine.

At Atermonas, the Perivoli tavern (+30 31045) makes the best Sifnian and Greek recipes, plus handmade desserts.

At Kastro, the tavern of Kapetan Yiorgis serves fresh fish, always and at Herronisos, the eponymous tavern (Herronisos, +30 33119) you’ll have lobster and lobster pasta.

For cocktails and beautiful music, go to Folie, at Kamares. At Apollonia, Veranda plays nu jazz, soul and funk. Also, Argo, Botzi, Cozy and Doloma, provide great music. At Armos, you’ll listen to Greek live music. At Rampayia for your evening coffee and at Gerontopoulos, for its great pastry.

Scrolling down the narrow street at Chora, you’ll find the Arodou Café and Drakakis, for raki and traditional delicacies.