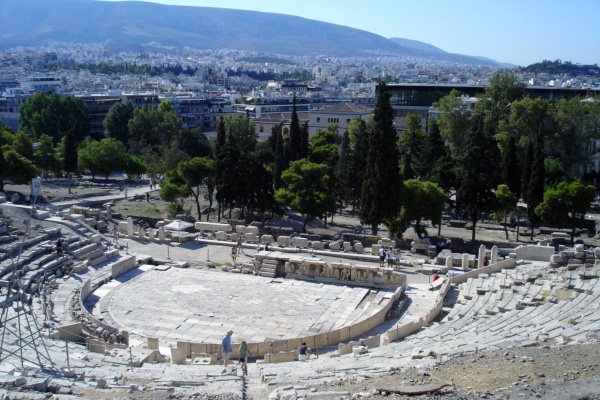 One of the world’s oldest theatres, the Theatre of Dionysus, the god of wine and fertility, lies on the South Slope of the rock of the Acropolis. The works of the three great dramatists, Aeschylus, Sophocles and Euripides were performed here.

The sanctuary of Dionysus Eleuthereus can also be found here, established in the 6th century BC as a site for the festivities known as Great Dionysia. Many of the buildings found here were converted into Christian monuments during the 5th century AD. The East Slope features the cave of Aglauros, where Athenian youths (ephebes) took an oath to protect the sacred institutions of the city, whereas the North Slope offers the spring of Clepsydra, as well as cave sanctuaries dedicated to the cults of Pan, Zeus and Apollo, the cave with the Mycenaean spring and the sanctuary of Aphrodite and Eros.