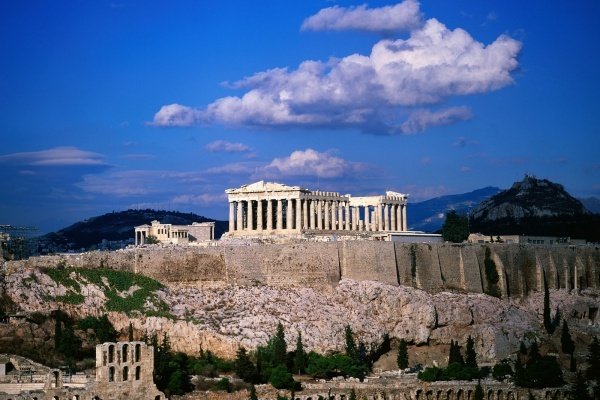 Spread throughout a vast area, the Acropolis of Athens is an example of smooth integration between a natural site and a man-made construction: a cluster of monuments built atop of a rock of roughly 30,000 sqm. The most important religious centre of Athens in the ancient times, the Acropolis houses an impressive collection of architectural works that were created during the Golden Age of Pericles (5th BC). Under the guidance of sculptor Phidias and the vision of statesman Pericles, some of the most significant monuments of the city were built during that period. Arguably the most famous among them is the temple of Parthenon, built by Ictinos (447-432BC), a shrine to the city’s patron-goddess, Athena Polias.

There is also the Erectheion, dedicated to the god Poseidon. In its porch one can see the replacements of the famous Caryatids (421-406BC) that are now housed in the Acropolis museum. Other monuments include the impressive entrance to the Acropolis, known as the Propylaea, designed by Mnesicles (437-431BC) and the temple of Athena Nike (421-407BC). Parthenon

One of the world’s most famous and instantly recognisable monuments, the Parthenon is a paragon of perfection and harmony, a living proof of the levels of expertise and craftsmanship reached during the Golden Age of Pericles. The Parthenon is also fascinating from an architectural point of view, combining the austere simplicity of the Doric order and the exquisite sophistication of the Ionic order. It is also renowned for its beautiful frieze, perhaps the most famous in the world, which depicts the religious ceremony known as the Panathinea.