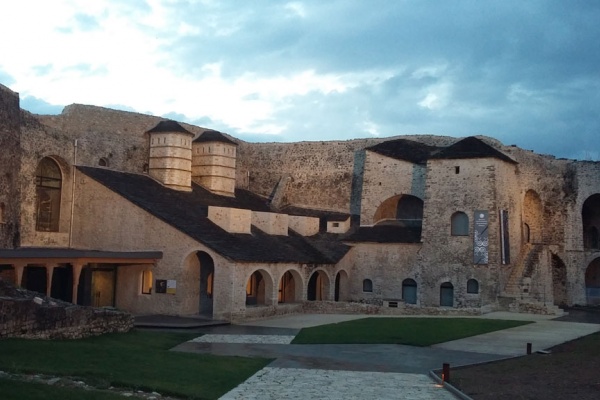 The art of the silversmith in the Its Kale kitchens. What we saw at the opening of the 9th thematic museum by the Piraeus Bank Group Cultural Foundation.

Ahh, the Ioannina jewellery! They are famous throughout Greece along with the tale of Kira-Frosini and Ali Pasha. It is all this together with the beautiful lake that have granted  this city its fame. The tale was preserved in books and the lake is there to soothe the heart. It is just the art of the silversmith that is not carried on anymore and is fading away. But, fortunately now it will be preserved in the memory of the older people and it's value will be taught to the younger. There may even be a revival of the old craft. There at the Its Kale castle, at the western bastion of the north-eastern acropolis, the Piraeus Bank Group Cultural Foundation (PIOP) worked their miracle again. The new jewel of the city of Ioannina and ninth PIOP “child”, is the Silversmithing Museum, which also concludes the Foundation's dream of a national thematic museum network throughout Greece.

The silversmith's craft was a great source of wealth and cultural heritage for the region of Ipirus. Now it has obtained a space were it can tell it's tales, talk about it's people and keep on forging silver with it's hammers. The museum is situated on the two old bastion stations and the building of the old castle kitchens, bringing thus to life a part of the old castle in an exemplary way. The architectural study financed by PIOP was carrried out by the Kizi A.E. Firm. The atmosphere is imposing and the exhibits are unique placing the visitor in a time machine where one learns how the craft was born, how it was passed from generation to generation to become a local tradition through the centuries.

Arms, jewelery, tools and all kinds of metals became an ornament in the hands of the locals. With silver as the main material but sometimes even with gold these craftspeople carved and adorned bringing their fame everywhere. Their new home at the top of the castle, is expected to attract 60.000 visitors and can easily be described as a technological museum since it presents the silversmith's technology in the pre-industrial period. At the same time it is a district museum, in the sense that it focuses on the history of silversmithing in this specific area of Ipirus. As far as the time recorded is concerned, the museum's permanent exhibition covers the post byzantine era starting at the 15th century onwards with mentions even of older times.

At the museum's entrance there is a hammer working, making a silver artifact, transporting the visitor directly into the silversmith's workshop.  Immediately after that, there is the distinctive silver lantern illuminating the questions that find their answers while the museum unfolds. It is particularly interesting to comprehend the local community and the way it was influenced and shaped by the continuous presence of silverware in the area. There is a distinct reference to the local craftsmen as well as who their customers were. The local silversmithing of the 20th century is also presented.

Typical of all PIOP museums, the use of multimedia is also here the means to transform the exhibits into a live narrator of a story you really want to hear about. All the traditional techniques become familiar and when you have reached the exit of the permanent exhibition you are very aware of the importance of silversmithing in the forming of the local identity but also it's importance in Greece's productive history.

The museum was inaugurated on the 24th of September by the Greek President Prokopis Pavlopoulos. In his speech he praised PIOP and pointed out that “economy and the banking system do not exist in a confined space but are part of society and have to adapt to the values and the principals of the society the are part of”. The PIOP president Mrs. Sophia Staikou expressed her profound joy at the completion of a great creative cycle in all those Greek regions, an important cycle for the local communities, their culture and tourism: “A significant project which was carried out with faith, consistency and a lot of hard work during the last 15 years. We have now come full circle with great success and I am very proud of that”.