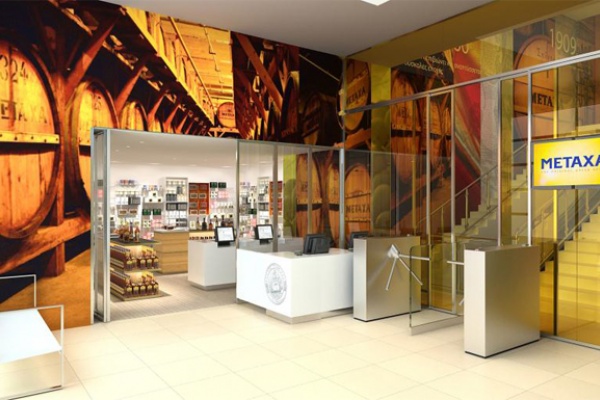 METAXA guides you through one of the new secret spots of Athens, well hidden in one of its most popular meeting points, the beautiful Lycabettus Hill. Under the auspices of METAXA, an inspired team of talented creative artists has transformed the funicular rise towards the top of Lycabettus Hill into a breathtaking journey.

While inside the foot of the Lycabettus hill, visitors find themselves magically whisked away in Aegean vineyards and subterrenean cellars, where METAXA, the smoothest drink in the world, fills the space. The trip upwards assumes a mystical, atmospheric quality. The experience culminates in visitors exiting the tunnel and gazing at the bright, almost palpable sun of Greece.

The team behind this unprecedented experience is an international group of talented creative artists. French designer Jeff van Dyck conceived the idea. Alice Pescho took care of the graphics. Visual artist Katerina Vagia implemented the “anamorphosis”, a perspective which showcases a subject in all its splendour from a specific vantage point. Well-acclaimed director Tasos Boulmetis shot the video.

Send an email to contest@athensvoice.gr, with the subject “Metaxa”, and win a ticket for this amazing ride with the Lycabettus funicular or a dinner for two (wine and METAXA included) at the aristocratic restaurant “Orizontes”, on top of Lycabettus.