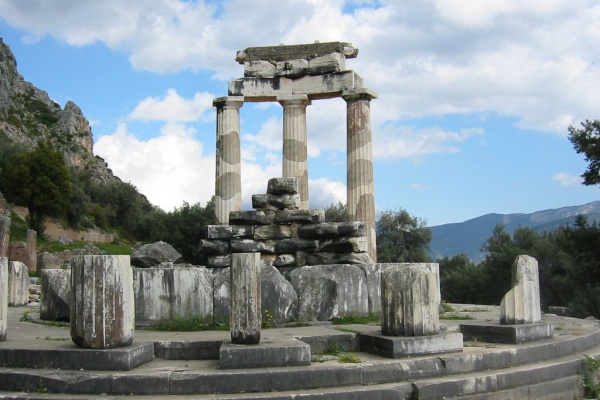 In Greek mythology Delphi was the place where two eagles released by Zeus to fly across the universe met and determined the Navel of the World. A major temple dedicated to Apollo and his victory over the terrible serpent Python was built there in 7th century BC. The local oracle was a religious centre where pilgrims, commoners and kings alike, from all over Greece came to consult Pythia, the priestess of the sanctuary. She mumbled her notoriously ambiguous oracles in a state of intoxication open to multiple interpretations.

These days Delphi is a small touristy village 180 km from Athens, built on the top of a cliff, next to the main archaeological site on the slopes of Mount Parnassos. There is an impressive 2,300 sqm museum housing findings from the local excavations that started by German archaeologists in 1892. The main highlights of the museum are offerings by the oracle visitors, the famous Charioteer of Delphi and of course “Omfalos”, the sculptured religious stone that represented the Navel of the World. The archaeological site consists of the Temple of Apollo, a stadium up on the hill, an ancient theatre and Delphi’s best known landmark, the “Tholos”, a circular building with three of its original twenty Doric columns restored, part of the sanctuary of Athena Pronaia.

How to get there

There is a regular intercity bus service from Athens KTEL station.  You can also opt for an organised tour.

Tickets cost around €15 one way