If you’ve only got a single day to spend in Athens, it’s probably a clever move to chart out your day’s agenda beforehand to ensure you’re able to maximize your time and make the most of your experience. If you don’t know where to start, fear not! We’ve collated the best of Athens below—which should give you a few ideas for a jumping off point, if not an entire travel plan. Feel free to personalize it to yourself, and your individual interests and attractions.

If you’re trying to squeeze as much daylight as possible out of your 24 hours in Athens, it might make sense to start your day at 8 A.M. in Syntagma Square. Syntagma Square is the central square of Athens, and a major point of its commercial, political and social life. Named after the constitution (syntagma) King Otto was forced to grant his people after a popular and military uprising in 1843, Syntagma Square continues to be a stage for demonstrations and political rallies above and beyond being a hub for tourist activity.

Syntagma Square also houses the Parliament building, built around 1842 as the residence for King Otto and Queen Amalia and serving as the Parliament quarter since 1934. At the bottom of the Parliament stands the Monument of the Unknown Soldier, a cenotaph (tomb erected in honor of persons whose remains are elsewhere) commemorating all fallen soldiers in war. The monument is guarded by the evzones, members of the presidential guard. Every 15 minutes, the two evzones standing guard switch position by way of a strange yet oddly alluring choreography.

We recommend getting to Syntagma Square at 8 A.M. so you can pick up early breakfast and catch the changing of the guards, officially kicking off your day in Athens.

From Syntagma Square, we recommend that you head toward Hadrian’s Arch and the Temple of Olympian Zeus. The Temple of Zeus is one of the biggest ancient temples of the Greco–Roman Empire, and one of the most impressive Athenian archeological sites. This massive temple was only completely in 132 AD by Emperor Hadrian after being partially built and then left in limbo for about 700 years for a variety of different reasons. After building a colossal statue of Zeus to adorn the temple, Hadrian then proceeded to build an equally large one of himself.

Although the temple is mostly decayed today, it does not take too much imagination to envision the beast it must have been so long ago. In fact, the Corinthian-style columns (17m high with a base diameter of 1.7m) are only 15 of a temple that had a whopping 104. Depending on how interested you are, you can choose to observe the temple from a distance or actually enter it. If you choose to visit, the entry ticket costs approximately 6 euros.

No visit to Athens is complete without a visit to the infamous Acropolis. The Acropolis is an ancient citadel located on a rocky outcrop above the city and contains the remains of several ancient buildings of great architectural and historic importance, the most famous being the Parthenon. Developed in the 5th century, it was the breeding ground of many modern ideas and innovations, including democracy itself, which grew from the conversations people and philosophers had on the lands of the Acropolis.

The most famous building in the Acropolis is the Parthenon, dedicated to the Goddess Athena. An enduring symbol of Ancient Greece, although the Parthenon has suffered much damage over the centuries, including the loss of most of its sculpture, its basic structure has remained intact. Moreover, the Greek Government is actively working to restore it. Other sights of particular interest in the Acropolis also include Socrates’ old stomping ground and the Erechtheion.

Note that the Acropolis is an immensely popular tourist destination, and even in offseason, can be overrun with a colossal number of visitors—making it important to take particular steps to avoid the swarm and improve the quality of your experience. One recommendation is to visit the Acropolis during the cooler hours of the day, either early in the morning around 8 A.M. or late in the afternoon at about 5 to 6 P.M. when there is only a fraction of the people who visit in droves during the morning hours. Another is to avoid the main entrance of the Acropolis and instead use the lesser-traveled south slope entrance. It’s also a good idea to get your ticket in advance, as well an audio guide or guidebook, so you know what you’re looking at.

If you’re particularly interested in history and archaeology, then you should absolutely visit the Acropolis Museum. Here, you get to see the best orientation of what you’ve already seen at the Acropolis—in fact, it might come as a surprise to some of you that the museum actually holds the original pieces excavated from the Acropolis whereas buildings on the site itself comprise mostly of replicas. Displaying numerous incredible statues and art saved, preserved and conserved from the archaeological site, the museum’s presentation is simply exquisite.

The ticket to enter the museum is 5 euros. If you’ve only got 24 hours, we’d recommend only entering the museum if you’re seriously interested. On the other hand, if you’re looking for a museum to visit for more than just the originals of duplicates you’ve already seen, we recommend the National Archaeological Museum. The most comprehensive museum in Athens, it’s also the only place you can see archaeology from every single region in Greece across every single time period. Note, however, that it does take about four hours to see it thoroughly and it’s recommended to take a guided tour to really understand the importance and context of the different artifacts you’ll undoubtedly be awed by.

Plaka is the oldest section of Athens. Located in the shadow of the Acropolis, it seems almost a world away from the urbanism of the city. Jewelry stores, souvenir shops, restaurants and cafes run abound in the area—in fact, Plaka is a pretty good stop to get some lunch; you’ll be able to enjoy outdoor seating and authentic Greek food. As for the souvenir shops, you’re likely to discover a number of interesting objects, some more eclectic than others, antiques, hand painted icons, carvings and paintings, all likely compelling enough for you to feel like you need to get souvenirs for everyone you know.

There is almost too much to do in Plaka over several weeks, much less several hours. A handful of places worth visiting include: Cine Paris, the best outdoor movie theater in Athens, Angelo the Ouzo King, the shop that prides itself on having the most varied line-up of ouzo as compared to any other shop in Athens, and Remember, a punk-fashion store. Plaka is paradisiacal, and has something for everyone, no matter what you’re looking for in Greece.

Bordering Plaka is Monastiraki Square, a flea market neighborhood in the old town of Athens, and one of the principal shopping districts. Not only does it boast landmarks and archaeological monuments like Hadrian’s Library, the Ancient Agora and the rebuilt Stoa of Attalos, with a museum exhibiting Athenian artifacts, but its flea market is also a huge tourist hit, with a jumble of shops selling everything from artisanal soaps to handmade sandals to souvenir T-shirts. A boiling cauldron of people, ideas, civilizations, and religions, Monastiraki is a must-visit!

After Monastiraki, we’d recommend taking a stroll along one of the most picturesque boulevards in all of Athens, offering an extraordinary view of the southern slope of the Acropolis, along with the Parthenon itself. Most of the buildings on one side of the road facing south were constructed in the late 19th and early 20th century in the neoclassical or modernist style, reflecting the aristocratic style of the street. Named after Dionysius the Areopagite, the 1st Athenian convert to Christianity and patron saint of the city of Athens, this not only offers you an opportunity to walk like a true local Athenian but also make for fantastic photo-ops.

Some places to look out for as you walk along include: the Sanctuary and Theatre of Dionysus, where the plays of the great Greek dramatists like Aeschylus, Sophocles, Euripides and Aristophanes were performed, the Sanctuary of Asclepius, a temple that housed patients and functioned as a basic hospital, and the Stoa of Eumenes, a walkway where theater-goers at the time could take shelter from sun or rain.

Varvakios Central Market is, to put quite simply, the Grand Central Station of food, where people from all walks of life converge to discover the freshest and most delicious ways to satiate their hunger. Everyone shops here, from celebrity chefs to neighborhood grocery store owners. Named after one of Greece’s national heroes, gentleman pirate Ioannis Varvakis, this is a tribute to the everyman, as the Athens Central Market knows no class divides.

Fish reign supreme, with almost a hundred fishmongers located in the heart of the building block. Even if you’d rather not buy anything, you’ll still be in total awe of one of the most interesting places in Athens. Alternatively, if you’re looking for any herbs, spices, or oils, this is absolutely the place to get them. Note that parts of the market start closing at 3:00 P.M (if you’d like to go earlier), but others are open until 7:00 or 8:00, so you will have plenty of time to look around.

Psiri is yet another neighbourhood in Athens, known for its restaurants, bars, live music tavernas, and small number of hotels, and our last destination for the day. While it might seem early to close down, rest assured, Psiri needs all the time it can get. We recommend starting with its street art—just like street artist INO once said in a New York Times interview, ‘If you want to learn about a city, look at its walls.’ Psiri boasts breathtaking and vibrant street art like that of Alexandros Vasmoulakis, who mixes collage, photography, paint, and digital media to that of Jupiterfab, known for his projects that express social and political opinions.

From there, we’d recommend heading back to the main square and catching dinner at one of its many restaurants and tavernas. Restaurants in Psiri are mainly traditional, with authentic Greek mezze and homemade specialties. Whether it be Kokkion, the artisan ice cream parlour, or Mavros Gatos, a Greek and Mediterranean restaurant, there is no shortage of the delicious in Psiri, so make sure you come hungry.

As the evening arrives, cafes, restaurants, souvlaki shops, ouzeries and bars in Psiri begin to open and soon, the neighborhood starts buzzing with the sound of music and conversation. Athens really comes alive at night and Psiri is at the centre of all that action. Nightlife is vibrant and bohemian, with small, friendly bars and hip entertainment. Tranzistor is a lovely place with colorful decoration and reasonable prices, Cantina Social, with its renowned Russian beers, attracts the counter culture crowd, hipsters and bands and Psira, one of the earliest bars to open in this district, is the favorite hangout for students. Pick up a beer at Beertime or some ouzo if you aren’t already tired of it.

Psiri is also really popular for its live music. A small bar called The Party has live rock and pop music just about every single night; other bars and clubs include Therion, 7-Times Club, Barrett Bar and so much more. If you still feel like you could use another drink after Psiri, you can finish off your day either at 360 Degrees or at A for Athens rooftop bar in Monastiraki.

If you’re looking for hotels, you can check out our directory at: https://www.bestofathens.gr/hotels. We’d recommend a hotel near Acropolis and its surrounding neighborhood if you’re only in Athens for one day.

We hope you have a lovely time! 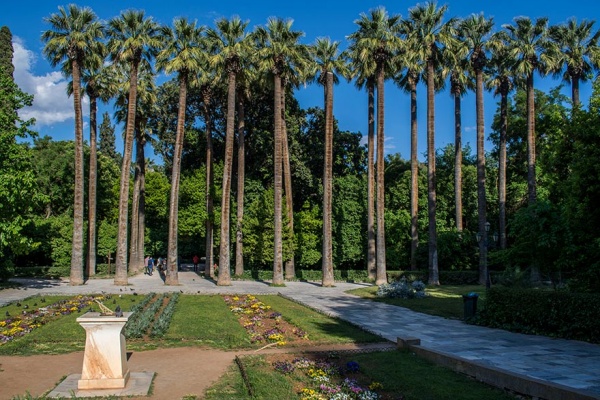