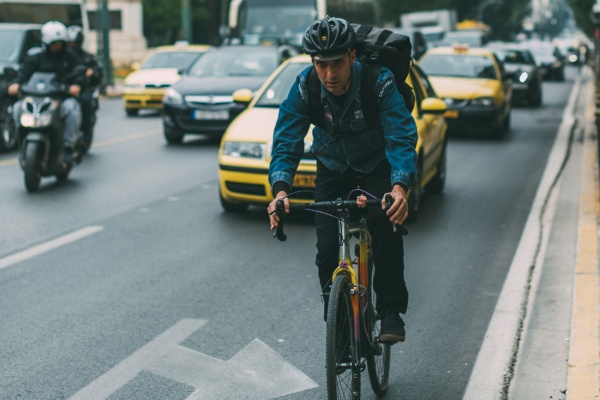 It might not seem so at a glance but the truth is that there are few more exhilarating ways to discover the city of Athens than on two wheels. Set aside your private and public transportation for the day and follow along on any of the cycling routes we’ve set out for you below—rest assured, when you’re surrounded by some of the most astonishing geography in the world, up close and personal, you’ll be grateful that you did.

One of the simpler Athenian cycling experiences, and a good choice for cyclists that aren’t particularly seeking a challenge, this route follows the pedestrianized circle that rings the Acropolis on the wide, tree-lined boulevard of Dionysiou Areopagitou. You can bike through Plaka, Monastiraki, Thissio and Koukaki, with a slight detour around the National Garden—not only does it make for an absolutely charming urban cycling route, but you’ll also pass by literally three millennia of existence—from stunning archeological sites of ancient Greece and Rome to the busy bustle and crowded streets of the city today; the old and the new in this crazy urban patchwork. Segments of a new pedestrian walkway and bike route in Athens were handed over to the public earlier in July with construction works set to begin at Syntagma Square. The “Megalos Peripatos” (Grand Stroll) pilot project, involves extending pedestrian and cycling areas and unifying the city’s archaeological sites and landmarks along a 6.8km walkway, scheduled to be completed by 2022.

This coastal cycling route is not for the faint-hearted—approximately 52 km in length, the road to the Temple of Poseidon at the tip of Cape Sounion is challenging but also incredibly rewarding. x Cycle on high-quality asphalt towards the imposing ancient temple, accompanied by the ever-faithful and majestic Saronic Gulf. The route is mostly flat with a few short hills, but even so, if your legs aren’t up to 50 kilometers in each direction, you can always stop early and turn around at any of the beaches or seaside towns along the way, like Vouliagmeni, Lagonisi or Anavyssos.

For an even more challenging ride, consider following along on a mountain trail—ambitious riders need not look far for incredible routes and stimulating terrain. Mount Parnitha is probably the most formidable of them, but it also rewards you with an otherworldly, lunar landscape around the nearby casino and eerie, abandoned sanatorium. Mount Ymittos is another favorite amongst seasoned cyclists—although its terrain is much rockier and requires a grueling hour’s climb. Mount Pendeli offers a thrilling descent towards the coastal beaches in Schinias. If you’re interested in mountain trails but you’re not quite to the challenge of a Parnitha or Ymittos, fear not—the area around the royal estate of Tatoi is full of idyllic trails through cypress, olive and citrus orchards—and are much easier and much more accessible for beginners.

This route goes along Athens’ longest (7 km) bicycle lane—starting from the Thissio Metro station, it passes along Ermou, and through the charming Athenian neighborhoods of Petralona, Kallithea, Tavros and Moschato. As it crosses the buried Illisos River, the route ends on an incredible coastline reveal from the Stavros Niarchos Foundation Cultural Centre, whose olive trees and lavender gardens are as refreshing to cycle past as the breeze that inevitably follows. From there, you can wrap up your tour—or you can keep going along the seafront promenade of the Athens Riviera, passing through Palio Faliro and Alimos to the buzzy coastal suburb of Glyfada. No matter how you spin this ride, the sights you’ll come upon are like none other.

This one is a bit unorthodox as compared to most other cycling routes—but its views are just as gorgeous. Several cycling tours in Athens offer to take their customers through the city’s graffiti-sprayed backstreets and hidden corners where hip young Athenians are creating the city's modern alternative culture, including street art alleyways, unique cafés and offbeat shopping districts. While we’d recommend going with a local tour guide, you can do it by yourself—some famous street art districts include Psiri and Metaxourgeio. All that said, this is probably better oriented for experienced cyclists since you will have to navigate fairly busy streets.

If you can’t stand the crowd and the daytime heat, this option’s perfect for you. Ditch the morning route and cycle through lamplit Athenian streets at night instead. Soak up the cooling atmosphere as you pedal past the streets—surrounded by soothing melodies of street musicians and illuminated ancient Greek monuments against the dark night sky. See stunning archeological sites like the Acropolis, the Parthenon and the Temple of Zeus in a way most tourists don’t, as well as the bustling nightlife of Syntagma Square, Plaka and Psiri. Consider opting for this option only if you’re an experienced cyclist or if you have a guide so as not to get lost at night.

Let's Meet in Athens: This company, run by a Dutch lady, and producing Dutch bicycles, offers not just a variety of tours of all ages but also arrange tailor-made routes for larger groups on request. Some of their popular bike tours include: a highlights of Athens bike tour, a bike tour through alternative Athens, the ride and bite bike tour and the archeological bike tour.

Sole Bike: This is the place to go for electronic bike tours—travel through impressive ancient sites built of marble and picturesque paved alleys, all along accompanied by bike-friendly earphones that assure that you won’t miss any story-telling details. Some of their popular bike tours include: the classic Athens bike tour, the Athens Riviera bike tour, a wine tour and a night tour.

Coco-Mat Wooden Bikes: These bikes are made entirely from all natural material including solid ash wood frames—thereby making them wholly sustainable yet wholly fashionable. Not only does it offer bike rentals, but also two different tours—one for ancient, archeological Athens and the other, a beach tour.

GR Cycling: They offer road, mountain, e-bikes and city bikes for rental, and several different tours should you like to be guided or accompanied. Some of its popular bike tours include: the bike tour to the temple of Poseidon, rides to Lake Vouliagmeni and Sounion and bike tours to Mount Parnitha.

Travelncycle: They offer half-day mountain bike tours to Marathon and Mount Parnitha, plus a range of other itineraries around Athens and Greece.

Attica Paths: They offer a range of guided bike rides from Athens, including to places Mount Ymittos and a Sounion bike safari tour.

Athens by Bike: They offer enjoyable and active bike trips around the city, combining secret spots and insider information with must-see monuments and landmarks. You can either join a daily group tours, book a private one or just rent a bike from them.

Roll in Athens: They offer small, personalized tours from 1-5 individuals in order to take into account each person's particular needs and desires. Some of their popular tours include a highlights of Athens tour and a coastal tour.

FUNKyRiDE: They offer a range of city, hybrid and mountain bikes for rental for anywhere from 3 hours unto 3 days, as well as repairs at their store in Koukaki.

One last place to consider not for tours or for rentals but rather to experience the atmosphere of the Athenian biking community is Vicious Cycles Athens in Psiri and the Handlebar next door (a cycling-themed café). The place is considered to be a sort of mecca for cyclists of all stripes. Not only will you experience the vibrancy of the cycling scene, but it’s also the best place to learn about cycling events, from road and mountain bike races to alleycats and raucous street parties.